During the last trip to London I took a tour of the locations of some movies and TV series. For the shortage of time, I was able to concentrate on a few films and as for the TV series I focused on just one: Sherlock! Today I’m going t take you to look for Sherlock Holmes in London, including the locations of Sir Arthur Conan Doyle novels, the 2009 film and the TV series. 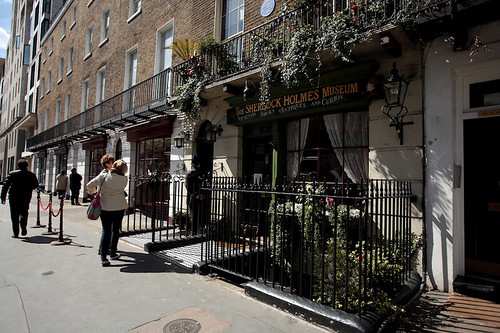 I’ll start, of course, from the Sherlock Holmes statue in Marylebone street (outside the Baker Street underground station, in Marylebone street near Madame Tussaud) and the Sherlock Holmes’ house, and museum, at 221B Baker Street. Have a look at the house numbers: the number of the museum, 221B, is not in the right place! Even if on the front door is written 221B, the museum is actually located at 239! The building is protected by the British government as a place of historical and architectural interest: the palace, in the Georgian style, was built in 1825. The ticket costs 15£ (children up to 16 years pay 10£). For more information about the museum you can, of course, have a look at the official website.
How to get there:  The nearest metro station is to Baker street. The station is along different lines: Bakerloo (brown), Circle Line (yellow), Jubilee (gray), Hammersmith & City (pink) and Metropolitan (purple) 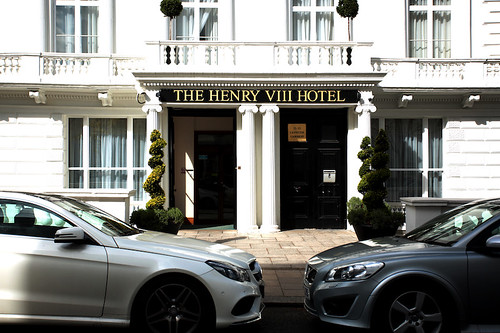 Now let’s go tothe buildings at 23-24 Leinster Gardens. These two buildings are appointed in the third episode of the third season of the BBC’s TV series (which, I must admit, I’ve only seen once registered to Netflix): in that episode the buildings are appointed as two buildings of which were left standing only the façades because the rest of the buildings were destroyed in order to built the ventilation system of an unspecified underground station. In the reality the number 23 is the hotel “Henry VIII” and the number 24, a housing building.
How to get there: The two nearest metro stations are Bayswater (Circle and District Line, yellow and green) and Queensway (Central Line, the Red Line) 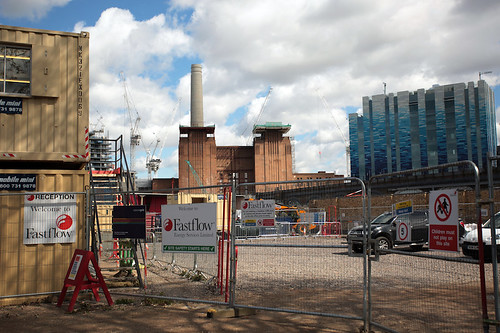 Let’s move on to the Battersea Power Station, on the other bank of the Thames. It is a thermoelectric power plant built in 1933, now disused and under renovation (if you are thinking to go there, you must go as soon as possible! It’s changing very fast, and you might not find it with its original form any more ). Many of you probably know this power plant because it appears on the cover of the “Animals” by Pink Floyd, with a huge inflatable ball shaped like a pig stuck to one of the chimneys (it’s said that during the photo shoot, this huge pig broke away from chimney, finishing on the landing Directive of Heathrow airport, disturbing the pilots of the aircraft). It appears in the first episode of the second season of the BBC TV series 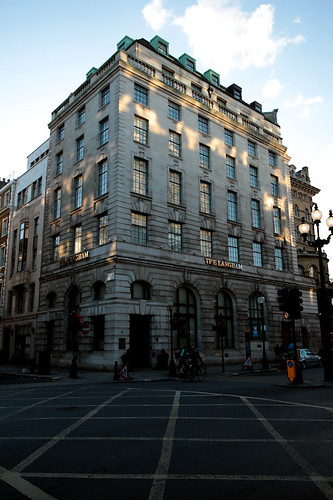 The Langham Hotel, 1C Portland Place (at the corner with Regent Street), is one of the largest hotels in London and it is said that, here, Arthur Conan Doyle and Oscar Wilde once dined together. It seems that, during that dinner the two writers had the ideas for their novels “the portrait of Doryan Grey” and “the sign of four”.
How to get there: the nearest metro station is Oxford Circus (Bakerloo line, Central Line, and Victoria Line); it’s also close enough to Bond Street station (Central line and Jubilee line).
In Covent Garden there is the Royal Opera House (I made few videos and few pictures from the secondary entrance, in front of Covent Garden because the other side was under renovations). This Opera theater is very loved by Sherlock (I’m not sure sure if  from Sherlock from literature, cinema or tv).
How to get there: the nearest underground station is Covent Garden (Piccadilly line), 2 minutes walk from the main entrance; alternatively it’s also fairly close to Leicester Square tube station (Piccadilly line and Northern line).
Nearby is the Freemansons’ Hall, the headquarters of Freemasonry in London. It appears in the 2009 “Sherlock Holmes” movie starring Robert Downey Jr and Jude Law. I wrote something more about this building in a post about 3 palaces to see in London.
(the nearest tube station is Covent Garden)
Another “Sherlock location” is the Lyceum Theater, where, in the novel “the sign of four”. the characters organize some of their meetings.
How to get there: the nearest metro stop is Temple (Circle and District lines)
Along the Strand, “under” the Savoy hotel, there is the restaurant Simpson in the Strand. 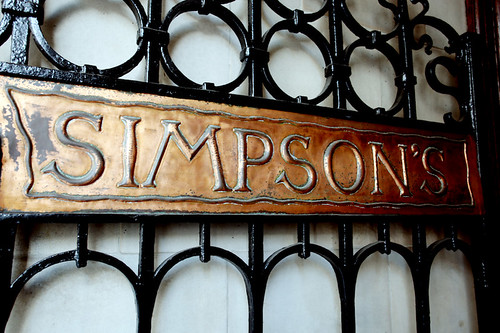 Opened in 1828, it has become a landmark of the British capital. Among the most famous regular clients we can find, in addition to Charles Dickens and George Bernard Shaw even Sir Arthur Conan Doyle and his detective Sherlock Holmes.
How to get there:  it is located approximately midway between the metro stations of Temple (Circle and District Line) and Embankment (Bakerloo Line, Northern Line, Circle Line and the District Line). Also the Charing Cross station (Bakerloo line and Northern Line) is quite near to the restaurant. 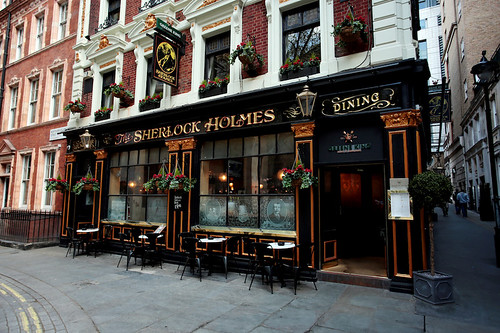 Between Trafalgar Square and Charing Cross station is located Northumberland Street, which is mentioned in the first episode of the first season (“a study in pink”): in that episode Sherlock and John go to a restaurant of this street to trap the killer, but in reality that scene was filmed in Broadwick Street in Soho. In the “real” Northumberland Street, a pretty little street (it took me a while to find it and it happened by chance), is located the Sherlock Pub which appears in the novel “The Adventures of the Noble Bachelor”.
How to get there: The two nearest stations are Charing Cross (Bakerloo and Northern line) and Embankment (Circle and District Line) 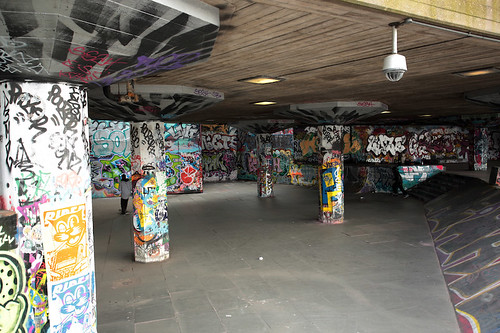 Now let’s go to the Skate Park of the Southbank Center. It appears in the second episode of the first season of the BBC series (In Italian the title is “the blind banker”). In the reality it is a place that seems to be very well known and popular among young skaters and populated by a large audience of people who seem to enjoy watching jumps of these kids.
How to get there: The nearest metro station is Embankment (northern, Circle, District and Bakerloo line), which is on the other side of the bridge called the Golden Jubilee Bridges.
We’re almost at the end of this tour, and we sto at St. Paul’s Cathedral which appears in the 2009 movie with Robert Downey Jr and Jude Law. (you may read some useful information about the cathedral in this post).
How to get there: the nearest metro station is St. Paul (Circle Line). 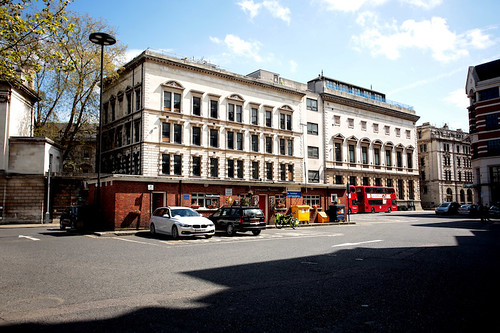 Nearby the cathedral there is the last set of this tour: the St. Bartholomew Hospital. I would define it the main place in the history of Sherlock and Watson: here there was the first meeting between the two, after which they became roommates. It’sfrom the roof of St. Bartholomew Hospital that Sherlock is staging his suicide at the end of the second season of the BBC series.
How to get there:The nearest metro station is St. Paul (Circle Line).
Ci sono, in giro per la città, ancora altri (tanti) “luoghi di Sherlock” e piano piano cercherò di fare un tour completo. Intanto chiudo il post con una “mappa” con le 11 di cui vi ho parlato oggi in attesa del prossimo appuntamento con Sherlock a Londra. 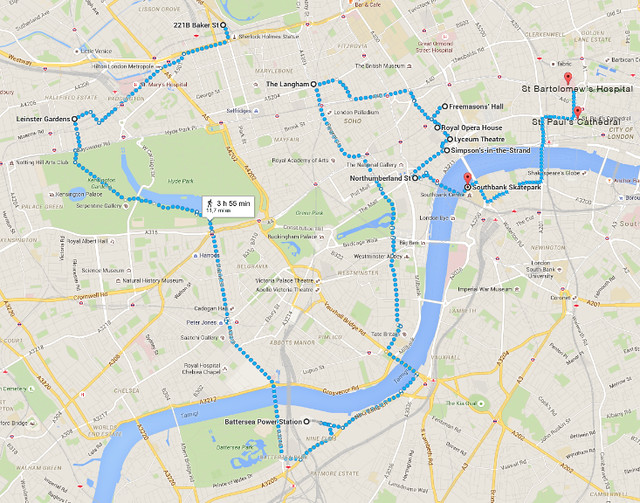