Lately, I have “let myself get carried away” by the desire to discover my city better

I, therefore, decided to dedicate at least one day a week to visiting a museum or historical place, sometimes even taking part in guided tours. Among the many places in my list, there is also Palazzo Corsini, which I was 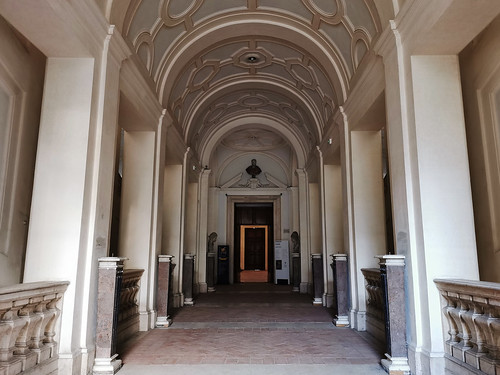 able to visit by taking part in a guided tour organized by Itineroma (tours are in Italian). The visit led us to visit 10 rooms, a gallery where there is the private collection of Neri Maria Corsini (one of the few private collections of the 700 still intact). Let’s start with a quick historical picture. Initially, the building that constituted Palazzo Corsini belonged to the Riario family, the initial structure included only the part of the corner on the left of the structure visible today. It was built in the same period in which Agostino Chigi built Villa Farnesina. This area, built to connect the port of Ripetta with the Vatican, was located outside of Trastevere and considered unhealthy due to its proximity to the 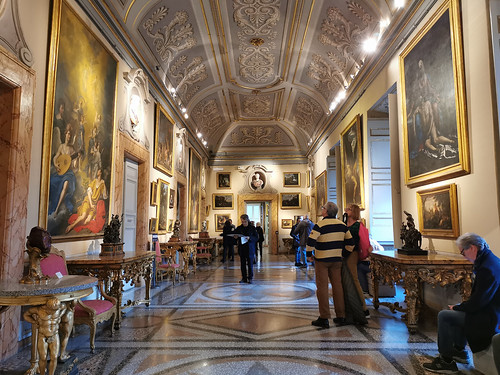 Tiber. Over the centuries the palace has obviously undergone numerous transformations and some of the adaptations and modifications were made by the architect Ferdinando Fuga, the same who took care of the Palazzo della Consulta (what is today the academy of the lynxes, housed in the building of front and inside of Palazzo Corsini itself). The central part of the building, where the entrance courtyard is located was the last part to be built. Even the 19th century was a period of changes and transformations, external porch, and the “quarrels” between the gallery and the Accademia dei Lincei (which divide the spaces) also begin. In the end, the collection is “tied to the palace” from a trusted trust. Visitors can reach the various floor by two double stairways interspersed with landings which, in the past, served as panoramic views of the outside. 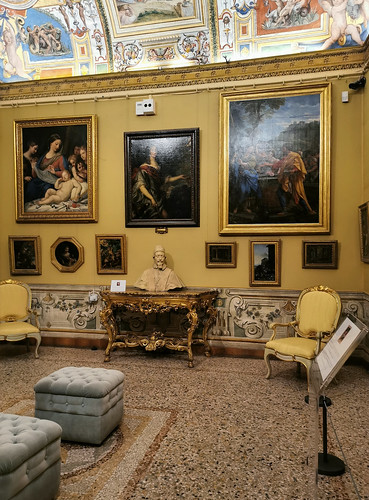 The palace garden, now partly a botanical garden, extended up to Piazza Garibaldi (at the Gianicolo) where there was another Corsini villa which was later demolished to build the square. Coming to the present day, what is now the Corsini gallery corresponds to the part of the ancient Riaro palace. In contrast, the rest of the palace today houses a part of the Accademia dei Lincei. Another small historical note: the Corsini family was linked to Clement XII. When the Pope died, therefore, the fortune of the family itself also vanished. We pass inside the gallery, which we visit focusing on some of the paintings on display (all obviously splendid works). I will not talk to you about all the works on display, and I will not report the whole story, but I will bring you the essential information. The visit obviously started from the ticket office room, where we stop in front of Jesus with Luca Giordano’s doctors. The scene represents Jesus as he speaks to them about medical subjects, while the doctors “run” to look for everything in their books (as they seem to know much less than him). In one corner you can also see Giuseppe and Maria intent on looking for their son inside the room, but looking on the wrong side.Along the corridor that once led to the apartments of Neri Corsini, our guide explains that the collection is arranged on a criterion of “symmetry of the paintings” (by size or subject). The paintings to be reported in the corridor are basically two (or at least these are the ones we look at): the Triumph of Ovid and the Torment of Prometheus (punished by Jupiter because he had set men on fire allowing them to evolve). This last painting is undoubtedly one of the ones that impressed me the most. 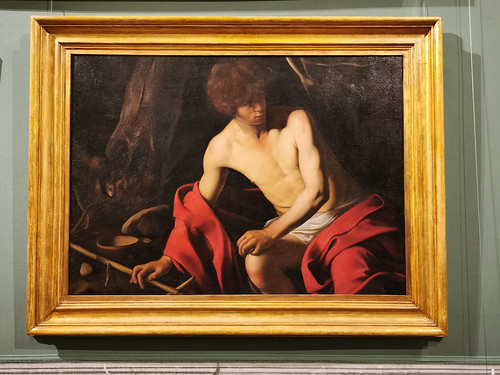 As we continue the visit, along the corridor that functioned as an anteroom to the rooms of Riario Corsini we pass in front of paintings by Van Dick, Orazio Gentileschi (yes, the father of Artemisia) and the Madonna with child by Andrea del Sarto. Entering the private rooms of the Corsini, we are immediately in front of the Corsini throne, found in the chapel where John XII is buried in San Giovanni in Laterano. The throne has a “Roman” workmanship, but in reality, it was made by copying the thrones of the Etruscan era.
We arrive in the rooms of Cristina of Sweden, who was hosted by the Riario (Corsini were not yet owners of the building). Daughter of King Gustav of Sweden, she was a central figure in the war between Protestants and Christians in Sweden. She became queen at 6, and there was, therefore, a long reign of regency, up to her 18 years (at 16 she decided to wait until she turned 18, the same age when her father who died in the war became king).
He entered a “religious crisis”, he wanted to become Catholic in a Protestant kingdom and decided to abdicate (without renouncing the title of queen) in favour of his cousin. He remained in Italy for about 30 years and had a court of about 250 people. It is a single room, “divided in two” by a colonnade and is one of the few places painted since the Riario era.
We end the visit with quick stops in the two following rooms, where there is the bust of Clement XII, a relative of the Corsini family, and a painting by Caravaggio (original, proven as such). In the last room, we found a temporary exhibition, it is the only cause of a gallery dedicated to popes and saints.

Please note: Palazzo Corsini is part of the museum complex of the Barberini Corsini National Galleries, together with Palazzo Barberini (located in via delle Quattro Fontane). The guided tour I took part in was made by ItineRoma.

Tagged In: Palazzo CorsiniRomewhat to see in Rome