Choosing even one museum to recommend in Rome has always been a difficult task for me. I would always answer “everyone”, but I know it is obviously impossible to see them all for lack of time and for different interests for each of us. So I started thinking about what my favourite museums in Rome were, and I managed to make a small selection. Here, then, are the 7 museums that I prefer among all those that the capital offers.

Palazzo Braschi hosts what is called the “Museum of Rome”, which is part of the Musei in Comune system. The museum is divided into 15 rooms on the second floor and another 5 on the third floor.

In its rooms are exhibited paintings, sculptures (above all of the popes, but also busts of nobles), tables in precious woods and precious stones, medals, drawers, a tapestry depicting the Barberini’s bees-emblem and more. Go up to the second floor through a monumental ramp in Baroque style, adorned with neoclassical statues and baroque stuccos and friezes. Above the ramp, there is an elaborate dome.

The “Gala Sedan”, one of the two carriages commissioned by Sigismondo Chigi for his second marriage to Giovanna Medici D’Ottajano, celebrated in Naples on 10 November, is displayed in the entrance hall that connects the entrance from Via di Pantaleo with the courtyard. 1776. Previously there were 4 statues by Francesco Mochi, depicting the Baptism of Christ (Jesus and Saint John the Baptist, initially intended for the choir of the Basilica of Saint John the Baptist of the Florentines) and of Saint Peter and Saint Paul (for the Basilica of St. Paul Outside the Walls), which in February 2016 were moved to the Basilica of San Giovanni Battista dei Fiorentini. The windows on the north side offer a beautiful view of Piazza Navona.

Where it is: Piazza di S. Pantaleo 10, between Corso Vittorio Emanuele II and Piazza Navona.

It is a thermoelectric power station which, after being shut down as electricity production plant, was used as a museum. She is also part of the Rome Municipal Museums circuit. 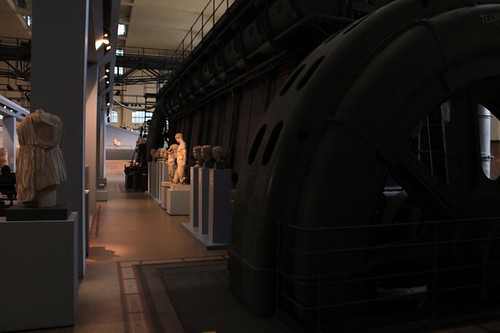 The thermoelectric plant was inaugurated on 30 June 1912: at the time it was the first public electricity production plant of the then “municipal electricity company” (now Acea). It was named after Giovanni Montemartini, a theoretician of municipalizations of service companies of public interest and councilor for technology, who died during a session of the municipal council in 1913.
The building is located just outside the Testaccio district and the area was chosen by the municipal administration for its proximity to the Tiber, the railway and the Via Ostiense. 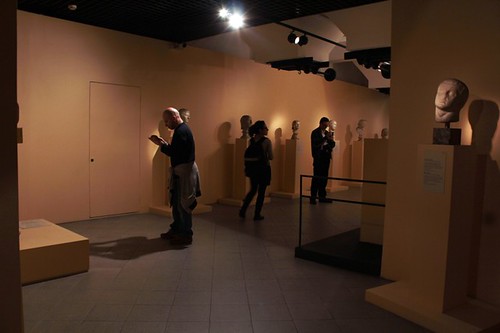 After half a century of activity, the plant was declared obsolete, and electricity production was interrupted in 1963. After more than twenty years of abandonment, Acea decided to restore the central body of the structure, where there are also the engine room and the boiler room, preserving and restoring the walls and some of the machinery. The recovery intervention represents an act of safeguarding Roman industrial archaeology. In 1995 several places of the Conservatories were closed for renovation in the Capitoline Museums on the Campidoglio. The sculptures were then exhibited in some areas of the now-former power station as temporary accommodation. 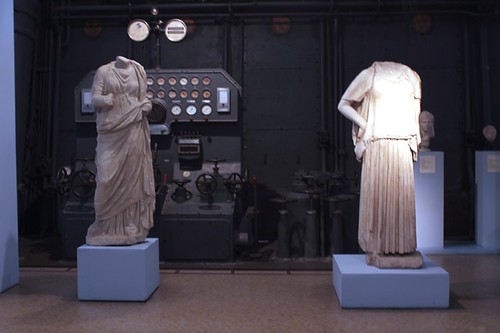 In 2005 the works were completed, but many sculptures remained in the rooms of the plant. In the places, today, there are exhibited classical works from the Roman era. Most of the finds consist of pieces discovered during excavations carried out after the Unification of Italy, in particular, those relating to the ancient Roman Horti. The exhibition is divided into three themes:
Republican Rome (the religious and funerary sphere, the introduction of luxury in the private field, portraiture), in the “Sala Colonne”;
the monumental centre of Rome (area of ​​the Flaminio circus, temple of Apollo Sosiano, Campidoglio, the sacred space of ​​Largo Argentina, Pompey’s theatre), in the “Engine Room”;
the gardens, the imperial residences and the Domus (Horti of the Esquiline, Horti Sallustiani, Horti Spei Veteris at Porta Maggiore, the mosaic of Santa Bibiana), in the “Caldaie room”.
Among the exhibited statues there are two Roman copies of the Pothos of Skopas.

The Borghese Gallery is perhaps one of the most famous museums in the city and exhibits works by Gian Lorenzo Bernini, Agnolo Bronzino, Antonio Canova, Caravaggio, Raphael, Perugino and many other noted artists. 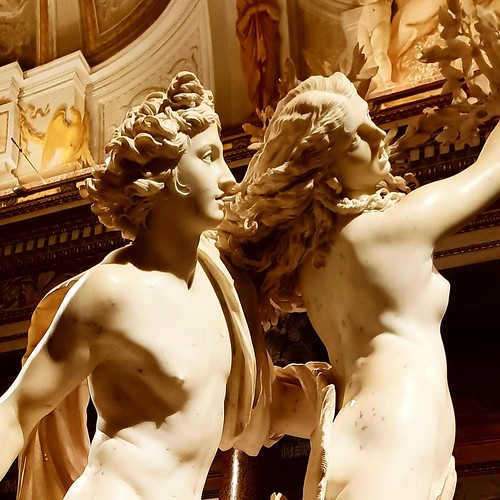 At the end of the 16th century, the Borghese family acquired land north of Rome, outside Porta Pinciana. In the same period, the family expanded its influence within the Roman aristocracy (especially when Camillo Borghese was elected Pope in 1605 under the name of Paul V): the family then undertook construction works such as the villa in the Pincio park.
The project began in 1607 under the control of the architect Flaminio Ponzio, upon whose death the architect Giovanni Vasanzio was commissioned. The work on the gardens by Carlo Rainaldi continued until 1620. The architecture of the villa takes its inspiration from Villa Medici, and Villa Farnesina and the entire façade is embellished with 144 bas-reliefs and 70 busts. In 1902 the villa was transformed into a museum, following the acquisition by the Italian State of collections belonging to the Fidecommisso Borghese. The gallery was closed in 1983, for some renovation works (it took 14 years to complete them) to restore the original appearance (especially its staircase). Admission, subject to payment, is contingent: visits are for two hours for a maximum of 360 people, from Tuesday to Sunday.

Where it is: Piazzale del Museo Borghese 5, inside Villa Borghese Pinciana.

It is an imposing residential complex located at the third mile of Via Appia and consists of three main monuments: the palace, the circus and the dynastic mausoleum also known as “Tomb of Romulus”, named after the young son of the emperor who presumably here he was buried. 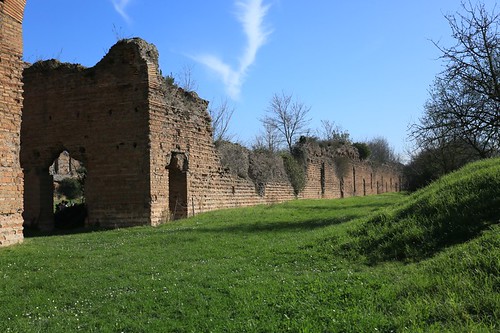 The Villa is the result of the transformation of an ancient rustic villa from the late Republican age (1st century BC), to which changes were made in the Julio-Claudian period (1st century AD). In the middle of the 2nd century AD, it underwent an imposing modification by Herod Atticus, who incorporated it into his large Villa known as “Pago Triopio”. The last one was the Maxentius period. In the years around 310 AD, he transformed the Villa into an imperial residence. He built the basilica, a circus and a mausoleum. He also opened a new monumental entrance. The Villa stood on a rise adapted with terracing supported by a 115-meter long cryptoporticus with two parallel galleries.

Above the terrace was the palace, which is still recognizable from the rooms on the sides of a sizeable apsidal hall which, at the time, was the most essential room in the whole complex (intended for public meetings, audiences and ceremonies ). In front of the classroom, there are some remains of an atrium. On the northern side, there is a long and narrow cistern, to the east of which you can see the remains of an environment that could be the monumental entrance to the palace. This was connected to the Circus.

The Crypta Balbi is a complex connected to the ancient theatre of Balbo in Rome. Today the museum is part of a vast complex of buildings (the churches of Santa Caterina dei Funari and San Stanislao dei Polacchi) acquired by the State in 1981 and which, in turn, rises on the arcaded courtyard attached to the theatre of Balbo, built by Lucius Cornelius Balbus in 13 BC. 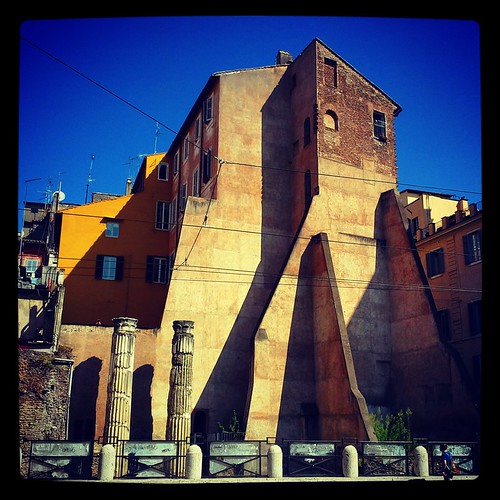 The complex occupies an entire block enclosed between via delle Botteghe Oscure, via dei Polacchi, via dei Delfini and via Caetani. Over the centuries, the area has seen different uses and settlements:
Roman age: urbanization included the Crypta Balbi, the houses behind and the southern side of Porticus Minucia, whose remains are on the other side of Via delle Botteghe Oscure.
Early Middle Ages: the church-convent of Santa Maria Domine Rose settled here; the houses of Via dei Delfini date back to the Middle Ages.
Renaissance age: a convent of Santa Caterina with annexed Conservatory (orphanage) dates from this period;
The nearby church of San Stanislao and the adjoining Polish hospice date back to the 18th century.

Particular attention is given to the finds that document craft activities (materials, tools, productions) carried out in the post-classical and early medieval age, highlighting the continuity of work and also the quality of the products, generally considered “obscure” in centuries, between VII and X.

The exhibition, aimed at showing the evolution of activities and settlements over time, presents findings on site, but also finds from other sites, and is very accurate and well documented, also from an educational point of view, describing largely not only the exhibits on display, but also the historical contexts to which they refer. Rome: a visit to Palazzo Corsini