Offagna has bewitched me, I must admit. I arrived in this small town of late medieval times at lunchtime on a hot (sweltering) summer Saturday. I need to admit (also) to have thought for a moment that I didn’t find anything open to eat a bite since there was no one around and it all seemed closed (obviously it didn’t go well, and there was also a good Rosso Conero DOC to quench your thirst).

The village of Offagna is not very big, the centre is turned in a short time (plus what it takes to visit the interiors of various places and museums, of course). But let’s go in order and see what there is to see in the village.

One of the most famous medieval fortresses of the Marche region, it dates back to the 15th century: it was built by the Maritime Republic of Ancona, between 1454 and 1456, to protect its mainland possessions, in particular, the expansionist aims of nearby Osimo. 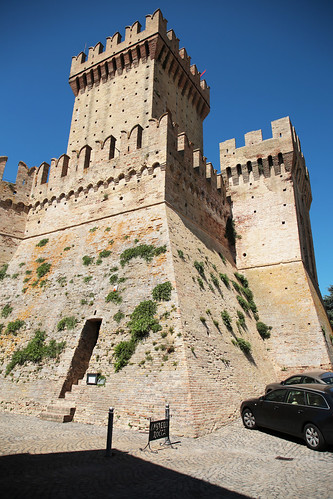 Offagna became part of the Ancona Castles. The fortress represents an outstanding example of military architecture in the Marche region and has been declared a national monument since 1902. Inside, in the centre of the small courtyard, there is the sighting tower (the keep) built on five levels, on the ground floor there It was a well that guaranteed the water to the complex. On the fourth floor, there was the entrance and the residence of the castellan was on the third floor. At the top of the master himself is the alarm bell: dated 1477, there is an invocation to the Madonna and the signature of the founder Iacobus de Istria. Today the fortress houses the Rocca Museum, where a collection of ancient weapons is exhibited, from prehistory to the modern era, as well as temporary exhibitions.

Located in the eastern part of Piazza del Maniero, it is located near the fortress and dates back to the 15th century. It was part of the fortification of guard around the main Rocca (probably it was built in the same period of the Rocca 1454). It was embattled and apparently closed with a roof like most medieval towers.

From the 18th century, it is a round-shaped church by Andrea Vici (two years before he had been elected a member of the prestigious Academy of San Luca). 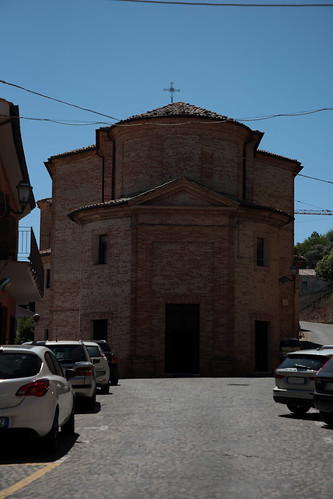 Vici’s late maturity work, the church is the result of a project that, history says, has entirely focused on urban and architectural problems.
The longitudinal plan structure is harmoniously inserted in the existing road network. The volume of the church is perfectly symmetrical, with two vestibules, two apses and two altars. The church is located at the intersection of two sharp-angle streets and the structure designed by the architect gives a curvilinear movement to the side wings that gently accompany the passage from the street outside the village to the inner one. The entrance is framed by two pilasters that support a classical tympanum, above which the cylindrical shape of the drum stands out. The layout of the structure is typical of the Baroque culture, and Vici designed two perfectly equal staircases to go up to the two apartments of the chaplains, as well as two vestibules on the sides of the main altar, two apses, and two altars, on the transverse side, perfectly symmetrical. The choir and the organ are located above the main entrance. After a long period of neglect, the church was restored and reopened to the public in July 2000.

Church of St. Thomas the Apostle

It seems that this church has not had peace for some time and that the current church building is the third it has had over the centuries. 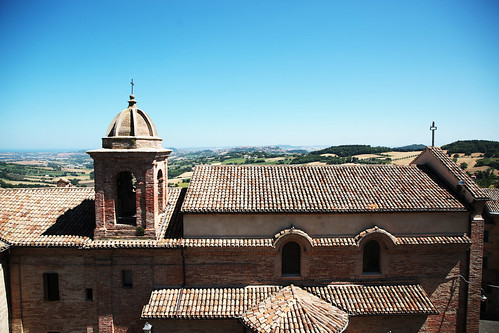 The first church, towards the end of the 14th century, was located near the northern gate of Offagna (far from the town center). The second, in the fifteenth century, was instead in front of the main door of the castle. The present church was begun in 1666 and finished in 1675. In 1769 the architect Andrea Vici prepared the drawing to develop the presbytery and the rectory (a project that was not entirely realized). The church was restored in 1825 and then in 1933 by the architect Luigi Garlatti of Ancona. Currently inside the church there is an altarpiece depicting San Bernardino in the process of donating the Municipality of Offagna to the Madonna, as a sign of protection. This painting is called an important historical exhibit showing the urban development of Offagna in the 18th century.

What else to see in Offagna?

The Church of Saint Lucia was mentioned for the first time in 1372. As early as 1653, a Crucifix was venerated to which the faithful offered many ex voto for received grace. 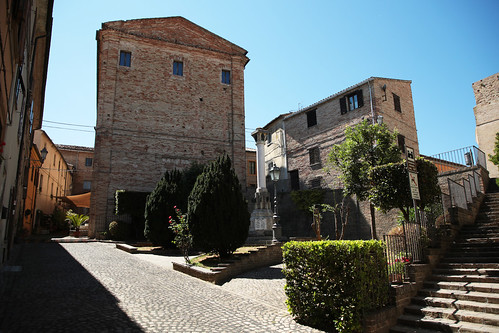 On June 17, 1762, the small church was at the centre of an event considered miraculous: during the excavation works to build the vestibule, on the right side of the church, a tomb was found containing a skeleton and an ampulla. The word immediately spread that these remains belonged to a martyr, and therefore the church became a place of profound reverence. Some years passed in expectation of the miraculous event that confirmed the authenticity of that discovery until the bishop decided to remove the alleged relics. Following the removal of the remnants, it was necessary to proceed with the restoration of the vestibule and Girolamo Vici, commissioned his brother Andrea. Finally, in Offagna there are also the Museum of Ancient Weapons, the Regional Museum of the “Liberation of Ancona” and, ultimately, the Monastery of Santa Zita (work of the Architect Andrea Vici, dating back to the XVIII century).