Those who follow me on social networks perhaps already know it: I spent the last weekend of June 2018 in the Marche region. This region, the only Italian “in the plural” is one of the areas I know less in It Italy and, after these three days, I would say that maybe I should turn there more often. 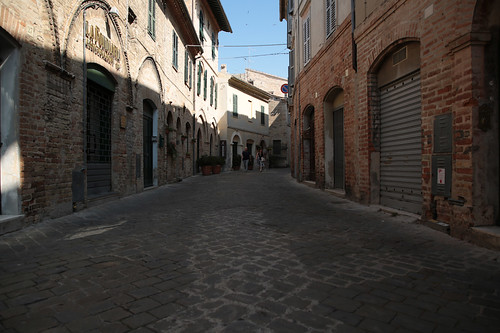 But let’s get to the topic of this post: Recanati, the city of Giacomo Leopardi. Just Recanati was the basis of my journey, I slept on a farm not far away from the town (by car, of course) and before leaving I was sure of only one thing: I wanted to discover the city of Leopardi, in particular, the places where the poet had passed his life (including seven years of crazy and desperate study). It is believed that Recanati, as well as Macerata, owes its origin to the city of Helvia Recina, also called Ricina (the name Recanati, in Latin “Recinetum” and “Ricinetum”, indicates the derivation of the town from Ricina). Recanati subsequently took shape when some places that were on the same hill began to join: the castle of Monte Morello, the castle of San Vito (also called Borgo di Muzio), the castle of Monte Volpino and the village of Castelnuovo, which initially it was probably called the Ricinati Castle.
In the city I left the car in the paid parking area “Parking City Center 2.0”, then entering the historic centre from Via Porta San Domenico. The streets of downtown, on Saturday, were populated by market stalls, experienced by locals looking for business and also numerous tourists. Walking through its streets.

This is what appears to be the main square of the historic city centre and right in the centre is the statue of Giacomo Leopardi, a monument built in the celebration of his birth (1898). 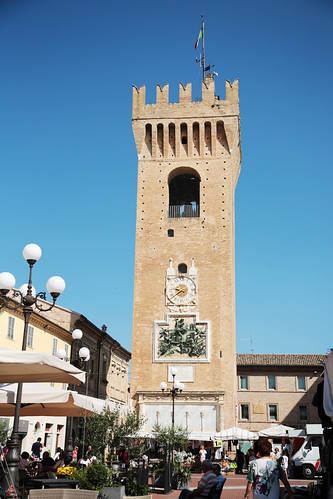 Looking at the statue, on the left is the Torre del Borgo, 30 meters high. This dates back to the 12th century, and at the top, there are Ghibelline battlements. At one time, this tower was part of the municipal building. On the side facing the square is a clock that is over 300 years old; on the left side of the tower, instead, there is a rampant lion, perhaps by Sansovino, which is the symbol of the city. The Town Hall, with two advanced side wings, offers many things to see: under the arcade, there are some tombstones, while inside are the Sala degli Stemmi, the Aula Magna which hosted Giosuè Carducci in 1898 and in the office of mayor a half bust of Leopardi. On the upper floor is the Pinacoteca, full of exceptional pieces, including Lorenzo Lotto. The Stemmi Hall, the Council Chamber and the Aula Magna can indeed be visited. On the square, there is also the church of San Domenico, Romanic and rebuilt in 300, from the marble portal, designed by Giuliano da Maiano and then built by Lombard masters in 1481.
[Information source turismo.marche.it]

Library of the Leopardi family

After a long walk through the streets of the centre, I finally arrived at Giacomo Leopardi’s house. You can visit the library and the museum (total cost of the two tickets: 10 euros per person). 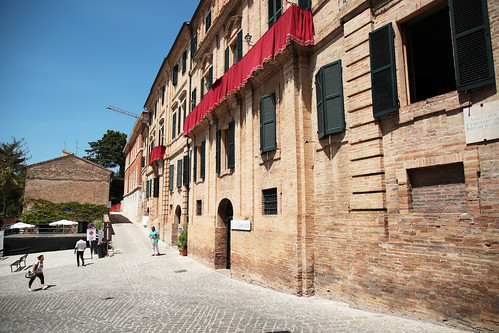 Initially, house and library were in two separate buildings, dating back to 1200, which were joined in the 700s by a great-uncle of Leopardi. To this day the noble floor of the house is still inhabited by the poet’s descendants and, since it is (therefore) a private collection, it is not possible to take photos in either of the two buildings. Today the Leopardi family still produces oil and wine. To discover the library, you must take part in guided tours that take place at fixed times (which are communicated when the ticket is purchased) and which last about 45 minutes. We pass through several rooms on the library floor, which was opened to the public in 1812, including the place where Leopardi spent the seven years of studies mad and very desperate. The books are, let’s say, divided by “topic” and in the room dedicated to religious volumes (more than 4,000) there are also books considered “forbidden”: placed inside a “closed” bookstore, Monaldo Leopardi (father of great poet) he was able to buy and display them because he asked for a papal dispensation. These books were bought by Leopardi his father at “cheap” from abbeys and monasteries during the Napoleonic wars (the French closed religious orders and burned books). The books in the library are, to date, available for consultation, but permission must be sought from the Leopardi counts. It may be strange that the most famous writings of the poet are not exhibited there, but there seems to be a reason: Claudio Ranieri, a friend who hosted Leopardi in Naples, decided to keep the most famous writings for himself when the poet died. His servicewomen. The poet’s nephew of the same name sued Ranieri’s servants, managing to win and get the writings back: he decided to donate them, and today they are on display at the Naples national library.

For this visit, I will spend just a few words, because I must admit that it turned out to be a small disappointment. 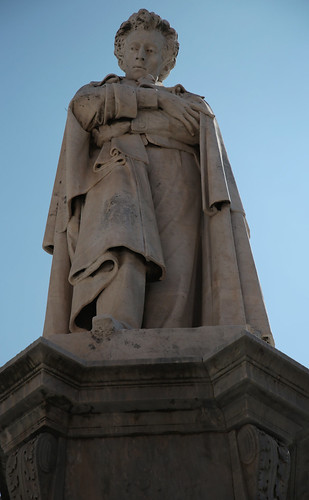 The entrance is next to the one for the library, as you enter you should find the ticket checker (I didn’t find it, so I was checked at the exit and only because I showed the ticket). The museum’s exhibition itinerary is divided into ten historical-thematic sections that run through the history of Leopardi, through objects, documents and writings. Among the numerous things on display, you will find the cradle and dress of Giacomo’s Baptism, few childhood games, childish autographs, the ceremonial dress of Monaldo gonfaloniere and other things.
Museum, library and experience opening times are:
Spring-Summer: every day 9:00 am – 6:00 pm
Autumn-Winter: Tuesday to Sunday 9.30 am – 1.00 pm and 2.00 pm – 5.30 pm (Closed on Mondays except for public holidays or pre-holidays, December 25th and January 1st. Silvia’s house is open exclusively from Friday to Sunday and public holidays).
[Official website of the museum: giacomoleopardi.it]

This is the square overlooked by Leopardi’s house. 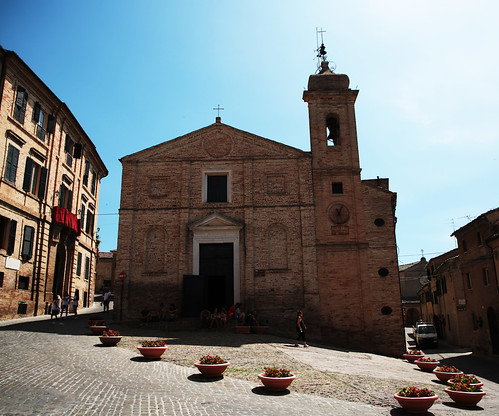 It obviously takes its name from one of Leopardi’s most famous works, and it is from here that all the other “Leopardian experiences” that animate the city of Recanati also start. On this square overlooks the Church of Santa Maria di Montemorello, the church where Giacomo Leopardi was baptized, and the home of Teresa Fattorini, the famous “Silvia”. A few hundred meters from Palazzo Leopardi and Piazza del Sabato in the village is the hill from which Giacomo wrote his most famous work, the Infinito. Here Giacomo Leopardi came in search of solitude and silence, trying to get away from the social life of his family. From here you can enjoy a beautiful view of the Marche hills and, on sunny days, the view extends to the sea.

Is there anything else to see in Recanati? But of course, yes!

Named after one of the two patron saints of the city, it has a coffered ceiling, and there are the sarcophagi of the bishop who wanted the construction of the Basilica of Loreto and that of Pope Gregory XII, the last pope not to be buried in Rome. The frescoes in the apse are also fascinating.

Beniamino Gigli, one of the opera singers (tenor) and actors of the ‘900, was born in Recanati. The museum named after him, housed inside the city theater, houses the reconstruction of the singer’s dressing room, his stage clothes, musical scores, honors, photos and objects that tell the tenor and his great fame.
Address: Via Cavour
Hours: Tuesday – Sunday from 10 to 13 and 16 to 19. Closed Monday Prices: € 3 full price, € 2 reduced (students, over 65, soldiers and groups) free admission for children under 6 years.

This palace is located not far from the theater. 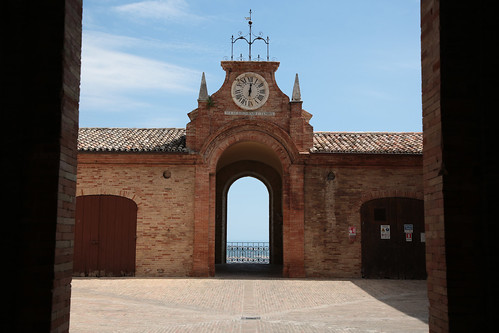 The peculiarity of this palace? The view of the Marche countryside and the Conero which can be enjoyed looking out from the “balcony” at the other end of the courtyard from the entrance.
The palace was built by Cardinal Venieri, under the guidance of architect Giuliano da Majano, in the second half of the fifteenth century. The façade and the interior were utterly transformed in the 1700s: the peristyle with an arched balcony (of which I spoke just above) remains, surmounted by a clock with the inscription “Volat irreparable Tempus”.