I admit that the religious aspect of Sofia, the Bulgarian capital, amazed me a lot: lavish architecture and because of the peaceful and sleepy proximity, in a few meters, of churches of different religions lead the traveller to think and reflect at every glance. 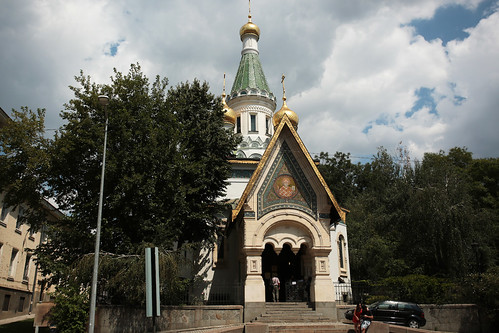 With this post I want to take you to discover this aspect of the city, talking about some of the churches I visited during my trip. I start from the small Russian Church (Tsurkva Sveta Nikolai): although very small, it immediately attracts the attention of those who pass along the street. Unfortunately, it is not possible to take pictures inside. You can’t miss it, as it is very close to the royal palace and many other 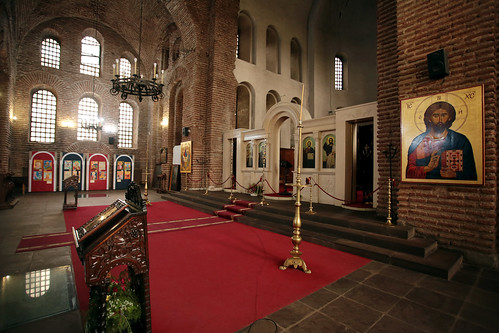 attractions of the city. The church of Santa Sofia is the church that gave its name to the capital of Bulgaria: they are so strongly linked because this church is located on a hill and was the first building that pilgrims and travellers saw coming into the city. Dedicated to the “divine wisdom” of God like the Hagia Sophia mosque in Istanbul, the interior is fascinating with its red bricks and religious icons along the walls and impressed me mainly for its simplicity. Even more interesting is the crypt of Santa Sofia: 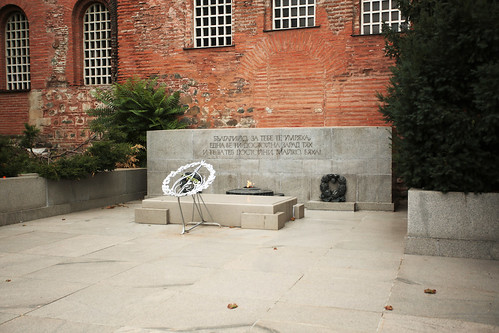 there isn’t the tomb of St. Sophia, but a layering on four levels of centuries and centuries of necropolis built where now the church is located! To visit it you pay six leva per head (about 3 euros) and to take photographs must be paid for another 15 leva (approximately 7.5 euros). Outside the church, there is the monument to the unknown soldier, and precisely in front of it, there is the seat of the Patriarch of the Bulgarian Orthodox Church. 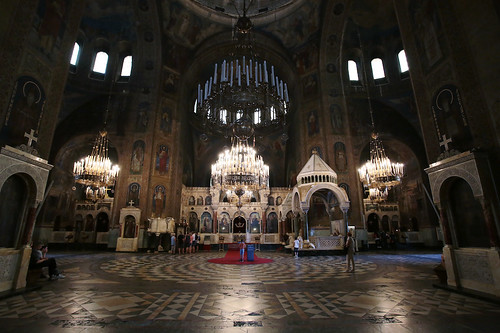 Not far away is the Alexander Nevsky Cathedral, which we all know as the symbol of Sofia. It is built in neo-Byzantine style, and this is one of the city’s largest cathedrals! There is not an entrance ticket, but there is a ticket to pay if you want to take some pictures: If you want to take some shots and think to “be smart” by not paying the ticket, I strongly suggest you avoid! There are several ticket inspectors, 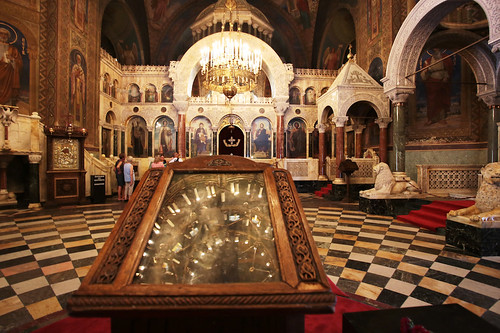 and they may ask you for the ticket several times during the visit. The interior is certainly not as bare as in Santa Sofia: majestic, imposing and frescoed in every corner of its walls and domes, it is the perfect symbol of a capital. I had read several tips about going to visit the crypt of the cathedral, but once I got there I gave a quick look and I decided not to go: the environment is totally renovated and “modern” compared to what you expect from a crypt, I do not understand absolutely anything regarding the icons and this form of sacred art and, therefore, I thought it would be more useful for me to invest that time in another way. 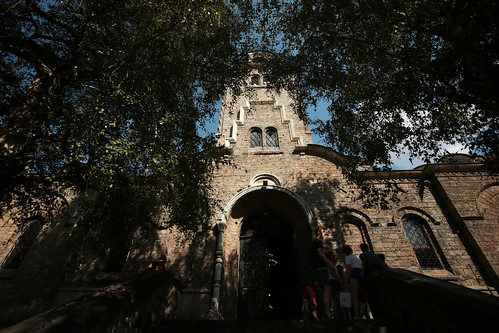 We continue the discovery of the religious buildings of Sofia with a visit to the cathedral of Sveta Nedelya, the orthodox cathedral of the city. We do not know much about the history of the early years of the building, except that (perhaps) the original structure was built around the tenth century and had a stone base and wooden walls. The building arrived unscathed until the mid-nineteenth century, when it was dismantled on April 25, 1856, to build in its place a biggest cathedral. 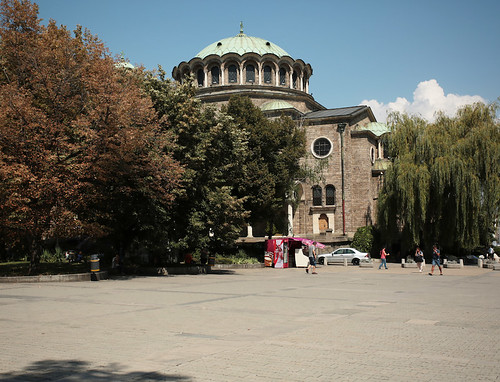 The new construction, still unfinished, was damaged by an earthquake in 1858, making construction work last longer than initially planned. In 1925 the church was seriously injured following an explosive attack that occurred during the funeral of General Konstantin Georgiev, which also caused the killing of 134 people and more than 500 wounded. It seems that the attack was due to the presence of the Russian Tsar at the funeral, even if this did not even touch him because he was late! To take photos inside, you have to pay a ticket (which I chose not to pay, so I do not have pictures of the interior). 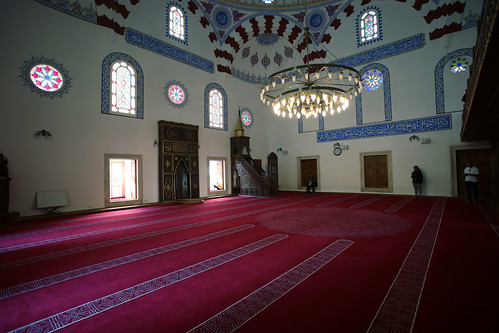 Not far from the Cathedral is the small Mosque of Sofia. To enter the Mosque, shoes must be taken off, and women must cover their heads (and shoulders both women and men, of course). Inside it is possible to take photographs without having to pay a ticket. The interior struck me for its simplicity and the beauty of the ceiling paintings and the few on the walls. In August 2017 they were doing some work, including roofing, so I suggest you check and get information to better organise your visit without skipping the city mosque (I noticed, however, that they are very fast and now should be finished). 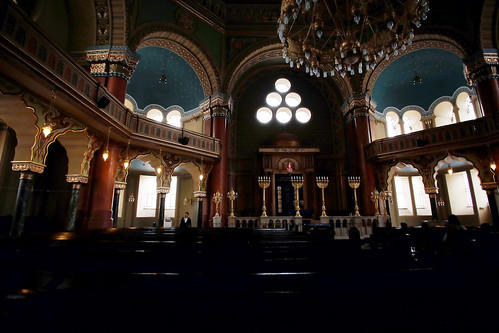 One thing that struck me a lot about the Bulgarian capital is the peaceful coexistence of different religions in an area of a few kilometres: not far from the Orthodox cathedral and the mosque, behind the central market of Sofia, there is the Synagogue. The entrance is along Exarch Joseph Street, on the right side of the market, they check all the bags very carefully, and some make them leave in a deposit/wardrobe. Built between 1905 and 1909, in neo-Moorish style, it is one of the largest monumental synagogues in Europe. 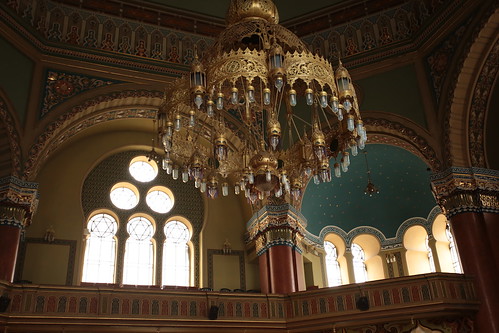 During the Second World War the synagogue did not undergo acts of vandalism or disrespect, but in 1944 it was severely damaged in the bombings that caused the collapse of some parts and the almost total loss of the library’s collection of books and manuscripts. Although in the post-war period many of the Jews in Sofia emigrated to Israel, the synagogue has never ceased to function at the service of the needs of the city community. There is no entrance fee, and you do not pay to take photographs. I recommend you visit it. 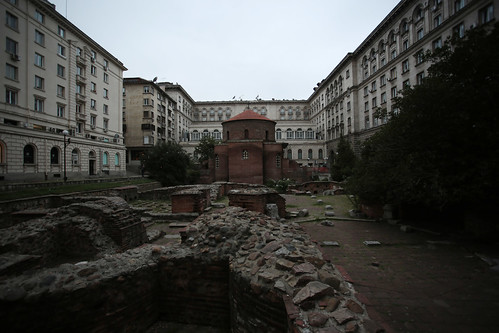 In the inner courtyard of the presidential palace, there is the particular and beautiful St. George Rotunda, a circular-plan church of the early Christian era built in red brick and considered the oldest building in the Bulgarian capital. Very particular, surrounded by a few remains of the city of Serdica (the ancient of Sofia), it is probably the religious building that struck me the most: the location, surrounded by modern buildings, its shape different from many other churches that I have seen around the way and its interior where “you breathe” the religion. 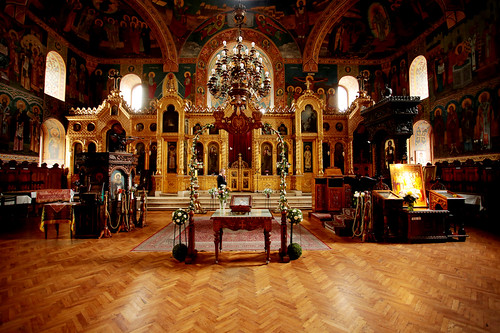 Not far from the Sofia Palace of Justice, there is Sveti Sedmochislenitsi or Church of the Seven Saints: the church is dedicated to Saints Cyril and Methodius, “inventors” of the Cyrillic alphabet, and to their five disciples. The interior is overflowing with gold and frescoes with intense colours, both aspects that strike visitors at the point, in my opinion, almost breathtaking. 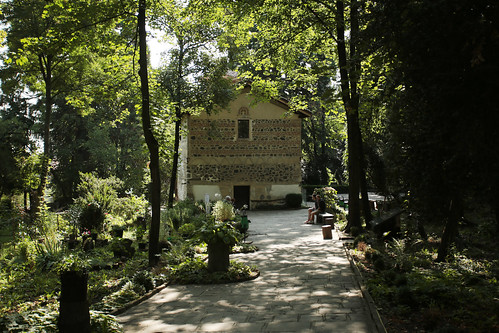 The perfect conclusion for this tour is undoubtedly the small Church of Bojana, a UNESCO heritage site located in a park on the outskirts of Sofia. You can arrive either by taxi, in about half an hour and for a price of 25/30 leva, or by bus (63, 64 or 107) with slightly longer travel times. The entrance ticket costs 10 leva (about 5 euros), you pay shortly after entering the park, and the church is at the end of a driveway in the countryside. There are some relatively strict rules for the visit: 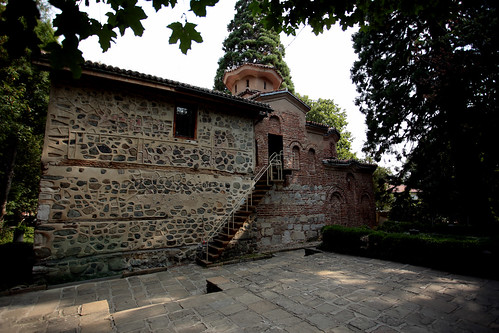 It isn’t possible to take photographs inside, large bags and backpacks should be left at the entrance and can only enter small groups of 8-10 people who can stay inside for maximum 10 minutes (and the caretaker will follow you every second). The opening hours vary depending on the season, of course: from 9:00 to 17:00 in autumn and winter (1 November – 31 March) and from 9:30 to 17:30 from 1 April to 31 October. You can find further information on the official website. I also leave you a link to Alessandro’s article, which I studied thoroughly before going (written in Italian).