We could define it as an ante litteram condominium, one of the very few that have come down to us. The remains of other insulae were found near San Paolo Alla Regola and near Palazzo Valentini, but this is the only one to have been preserved so well. These buildings, vast and built-in height, developed from the second century to respond to a housing emergency among the poorer classes (the Domus, for the wealthier classes, designed in length and had at most a relatively low second floor). 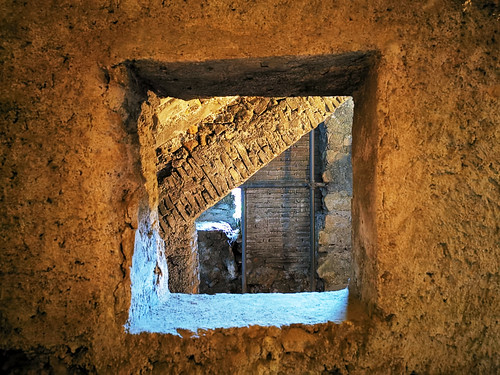 We said, therefore, that homes as these were developed on several floors and were always subject to fires (given the number of people who lived there, it was more than a tragedy). Over time, then, the emperors try to solve the problem with ordinances: first they worked with a corridor to separate two nearby Insulae, but obviously it was not successful. Subsequently, they try to impose “two walls attached”, then each insula with its perimeter wall. Finally, with Augusto, they begin to put a limit on the number of floors that could be built (he put it on 5 levels. Trajan then puts it on 4 storeys). It seems that this building must have been below the four-storey limit. Still, perhaps it had five: therefore it was either a building abuse or this insula had a unique pantry because it rested on the rock of the Capitol. The original entrance, from which a staircase leading to the upper floors started, is (unfortunately) walled today. The ground floor today is lower than the current street level. At the time the street was much smaller, and on the ground floor, there was the tabernae that were not connected 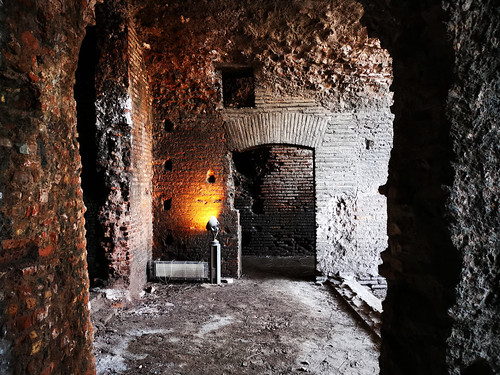 to the noble storey (access was directly on the street level). The first two rooms have a recess, used to anchor the insula to the Campidoglio hill. The building was built entirely of brick, except in some places where tuff elements were used. It seems there were frescoes, which were however of very simple workmanship since it was a building for the less wealthy classes. We entered the main floor, where it’s possible to visit three rooms, which were probably part of a single house (the other three rooms were from another apartment). In each room, decidedly small, there were 4 people. Inside the place from which we entered the area, the remains of the first-floor rise, dating back to the 5th or 6th century, are visible. Returning back to the first room, take a staircase to go up to what was the third floor (if you also count the “mezzanine” floor). 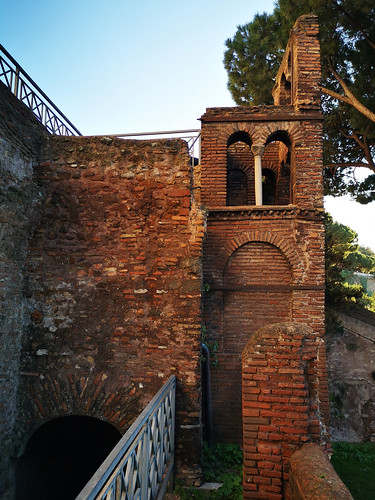 Over the centuries the Insula dell’Ara Coeli has been covered with several buildings, including two churches: one dedicated to San Biagio, and a successive dedicated to Santa Rita da Cascia. The insula was rediscovered during the fascist era, and in that period an iron cable was placed on the top floor to anchor the facade (there was a risk that the facade would collapse). The cable, however, over time has shown to have the opposite effect! Precisely for this reason, the entrance capacity has been reduced from 25 to 12 people. The visit ends on what was once a balcony, in the shadow of the splendid Ara Coeli and Vittoriano church. I must admit that seeing the second from there has an entirely different effect (it is very affected by its grandeur). It almost made me smile to see, from above, the traffic in Piazza Venezia which, apparently, already in Roman times suffered from noise pollution. In essence, however much I have been living it every day for some time, to go to the office, as busy I never realized to what extent it was messed up and full of cars, buses, tourists and chaos.