During a trip to Madrid the Royal Palace, now used only for representation events (the royal family doesn’t live here), is one of the attractions “not to be missed”. Among the many things I chose to do during my trip to the city, the one at the royal palace was one of the last things I decided to do. This palace was the royal residence from Charles III until Alfonso XIII, its construction began in 1738. The building, inspired by the sketches made by Bernini for the development of the Louvre, is built around a square patio and includes (among many environments) a gallery and a Piazza d’Armi. 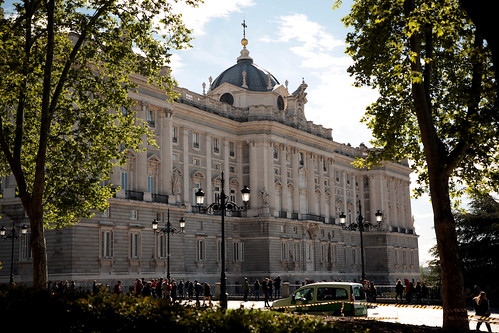 Among the most beautiful rooms and architecture of the more than 3,000 rooms of the building, there are the Escalera Principal designed by Sabatini, the throne room (the ceiling is the work of Tiepolo), the Salón de Alabarderos (the ballroom transformed into a guard room from Carlo III) and other places still. I begin to talk about the visit starting from some useful information for the tour, before moving on to my personal opinions.
Opening hours: vary according to the season.
Winter (October to March): every day from 10:00 to 18:00
Summer (from April to September): every day from 10:00 to 20:00
I arrived at about 9:45 am, and there was already an extensive line of visitors (both with and without tickets). I then arrived at the cashier at about 10.45am: my suggestion is to reach the entrance a little earlier than the opening time because the line does not show any signs of diminishing (and there is the “risk” of spending a lot of time waiting to enter). 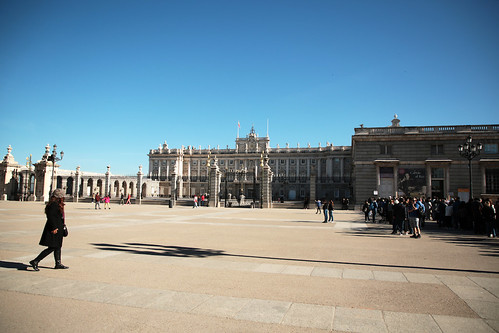 At the entrance, you must pass a metal detector and the bags, the big ones, in particular, must be left in the wardrobe. The last access is allowed one hour before closing;
Entrance ticket:
General admission: 10 euros;
Reduced: 5 euros;
Entry with a partial visit (when there are official ceremonies): 5 euros;
Guide: 4 euros;
Audio guide: 3 euros;
General admission to the Palacio + Real Cocina: 14 euros;
Reduced (Palacio + Cocina): 9 euros;
Entry only to the Real Cocina: 5 euros;
Entrance to the gardens of Campo del Moro: free;
Entrance fees to the Sabatini Gardens: free;
I chose the 14 euro ticket, which allowed me to visit the palace and the royal kitchen. Visits to the kitchen have predetermined times: once you arrive at the cash desks, when you buy the ticket, you will be notified of the first available time (you will find the time you chose printed on the entrance ticket).

Duration of the visit: considering the visit to the building, to the kitchen and to the halls of the armour, for the complete tour it takes about two hours. At these times it should also be added a visit to the gardens (considered at least an hour more), for a total of about half a day.
Photos and videos: you can take pictures only in the outdoor courtyard while visiting the kitchen and on the entrance stairway.
Now, as I wrote a few lines above, I would like to add some of my personal opinions. I admit that the visit to the royal palace disappointed me a little, in several respects. I want to discuss them point by point, to make as little confusion as possible and be sure to write down everything I would like to say about it.
Photo: I was told at the cashier that the pictures could only be taken in the outer courtyard, as soon as you came out of the ticket office. Instead, after leaving most of the equipment at the wardrobe, I then discovered that it was possible to do them even while visiting the kitchen and on the staircase.

It left me a little disappointed. The world didn’t collapse on me for not having brought the camera with me, but having asked the cashier for precise information, I would have liked to have received a slightly more accurate answer.
Visiting the kitchen: I admit that here, perhaps, I have been deceived by myself, but let’s proceed methodically. The precise time, the meeting point and the fact that few people brought us to the kitchen in a group made me think that it would be a guided tour. However, once we arrived, the people who brought the group told us (only in Spanish) to walk around, take pictures and then wait outside. All without any explanation about the rooms. Of course, information can be found on the internet or on guides, but given the visit formula, it would have been interesting to have a live explanation as well. 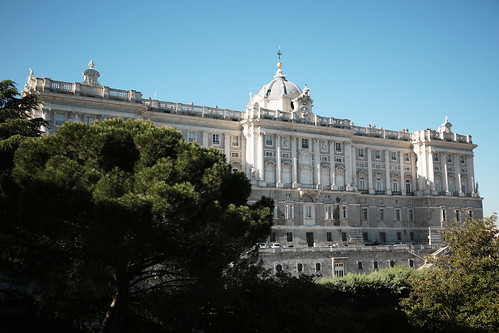 Guided tours: the visit to the rooms of the palace takes place only following an obligatory path. These are, unfortunately, very “tight” and this causes the row to flow very slowly and create traffic jams along the way. So some rooms are undoubtedly challenging to see in their entirety: too many people all together and in too little space. Probably diluting the entrances would help, even if I understand that given the enormous crowding it could be challenging to insert a sort of “closed number” (like at the Galleria Borghese in Rome, where they let only 360 people enter every two hours).
However, summing up, overall it was an exciting visit: taking into account these “negative” sides, I would still advise you to enter the royal palace among the places to visit during a journey to discover the Spanish capital.