Until September 2019 I had never been to Turin and I had never been able to go to see a Cirque du Soleil show, something that I had wanted a lot for years. Today I want to take you to visit the city through some of its most famous and iconic places (excluding the cinema museum and the Egyptian museum, which I told you about in a dedicated post).

Piazza San Carlo is one of the most important squares in the historic center of Turin. 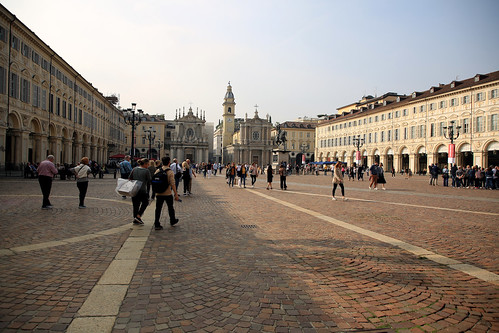 Called the “living room of the city”, it is connected to Piazza Castello and Piazza Carlo Felice, and its current appearance dates back to the 17th century: the project was by Carlo di Castellamonte and was then modified (with additions) with a project by Benedetto Alfieri a century later. At the center of the square is the monument to Emanuele Filiberto di Savoia, a work by Carlo Marochetti of 1838, which depicts the duke in the act of sheathing his sword after the victory of San Quintino. The square is surrounded by several noteworthy buildings such as Palazzo Solaro del Borgo, dating back to the seventeenth century (and modified in the following centuries) and now used as a hotel and seat of the Turin Philharmonic Society, and the Palazzo Guido Villa, Turinetti di Pertengo or De Felicon whose facade was damaged during the Second World War (today it houses some offices of the Intesa Sanpaolo bank and the private German language school Goethe-Institut). Finally, on the smaller south side of the square, there are the two churches called “twins”, of Baroque architecture: the church of Santa Cristina (left) and the church of San Carlo (right). The two buildings surround the natural continuation of via Roma, which widens into the small square that was previously called “of the two churches”, to then be renamed piazza C.L.N. in 1946.
I went there on Saturday morning, almost at lunchtime, after visiting the Egyptian Museum (of which I will speak to you shortly in a dedicated post). We are talking about a very elegant, royal square (I expected it a bit in Turin) and that looked like “a living room”: lived by Turinese and tourists, there were so many people sitting having a drink or walking around the square.

Piazza Castello is the main square of Turin, the heart of the historic center of the city. 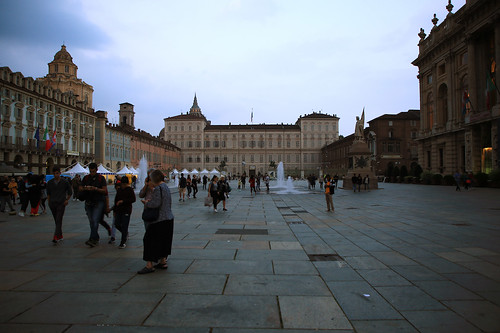 On this square, at the center of which is the Palazzo Madama and Casaforte degli Acaja, overlook several important Turin buildings: the Palazzo della Prefettura-Armeria Reale, the Teatro Regio, the Real Chiesa di San Lorenzo, the Galleria Subalpina, and the Torre Littoria. To the north-west of the square is the small Piazzetta Reale, which gives access to the Palazzo Reale and the pedestrian walkway to the square where the Turin Cathedral is located (Piazzetta San Giovanni).
I went to Piazza Castello several times during my weekend in Turin. Coming into town during the weekend of the Stratorino (town marathon held on September 29), I found the square “festively decorated” with shows, music and above all the finish line of the marathon. Piazza Castello also certainly shows its elegance.

The metropolitan cathedral of San Giovanni Battista is the main Catholic place of worship in Turin, located in the square of the same name, and cathedral of the archdiocese of Turin. 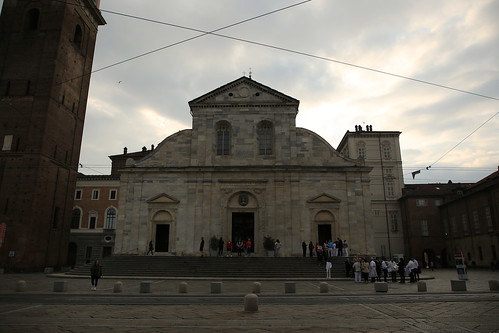 Built at the end of the fifteenth century, in an area where originally it appears there were three early Christian churches dedicated to San Salvatore, Santa Maria di Dompno and San Giovanni Battista, it is located “next” to the archaeological area where the remains are located of the Roman Theater of ancient Julia Augusta Taurinorum. Turin’s only Renaissance-style religious building, it has housed the Holy Shroud since 1578. I came to visit it on Sunday morning, the day of my return to Rome, as the first stop of the day. I admit that before leaving I had made a rough program, not feeling very well I didn’t want to get too tired (risking getting sick), thinking that I would decide day by day how to move: having studied little I expected it to be “different”, bigger and impressive. After a moment of “disappointment” due to realizing that “I had not done my homework well” I entered and I was obviously impressed.

Archaeological area of ​​the Roman Theater

The archaeological area is located exactly next to the Duomo. It takes visitors back to the time of the city of Augusta Taurinorum. The theater dates back to 13 BC, was active until the third century, and today represents the only infrastructure in the Roman city to provide us with significant evidence of how the city evolved in the three subsequent construction phases.
The remains that can be seen were brought to light between 1899 and 1906, during the excavations for the construction of the new wing of the Royal Palace, commissioned by King Umberto I. The architect and scholar Alfredo D’Andrade firmly opposed the demolition of the vestige: reliefs were made and the design of the new wing of the Royal Palace was then modified. In addition to the nets visible near the Duomo, there are others in the basement of the Museum of Antiquity. The theater was located in the wealthiest district of Turin in the Roman era, surrounded by numerous patrician houses and not far from the forum, built (on a slope) close to the city walls. Expanded over time, structurally similar to the Roman theater of Augusta Raurica (Basel), the ancient Roman theater of Turin is one of the smallest theaters of its kind.

I limited myself to observing the area from outside, along the way to go and take public transport to the Valentino Park (in the end I went on foot, the city marathon messed up some routes and times of the means, together to my plans).

Porta Palatina was the Porta Principalis dextera of Turin, the door on the north side of the ancient Augusta Taurinorum. This is one of the city gates of the 1st century BC. best preserved in the world and is one of the main testimonies of Roman Turin. It is also part of the Archaeological Park of the Roman Theater. It was built during the Augustean Age or the Flavian Age, perhaps on a previous republican gate, along the road that led to Ticinum (today Pavia) and Mediolanum. In the 11th century it became a castrum, while at the beginning of the 1400s it was “restructured” (the left tower was rebuilt; later on both towers were added battlements for defensive purposes).

I also saw this from the outside, because in reality I wanted to dedicate the rest of Sunday morning to the Valentino Park which we will discuss later. So I will also add this place to things to see during the next Turin weekend (I was unable to find an official website that reported any opening hours. Should I succeed, I will update the post).

This square, with a narrow and long shape in the historic center of Turin, owes its name to the municipality of Solferino, where an important battle took place on June 24, 1859 during the second Italian war of independence (the Franco-Piedmontese troops won the Austrian troops). 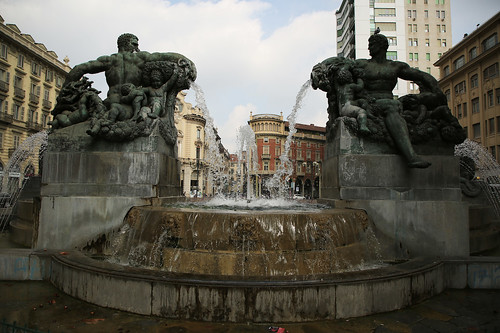 In the nineteenth century the square was located on the outskirts of the city and “delimited” the southern borders of the ancient Roman castrum (ie the current via Cernaia). The square that can be seen today is the 1853 version (before it had another aspect, with apparently heterogeneous buildings). I came up here, deviating slightly, from the path I had planned, to come and observe the angelic fountain (of which only beautiful things had told me). Wanted by the mayor Riccardo Cattaneo, it was inaugurated in 1930 and is composed of four imposing groups of statues representing the four seasons; autumn and winter were made in 1926, Spring in 1928 and Summer in 1929. Twelve masks with zodiac signs were placed in the tank. Although it is “just a fountain”, if you are on the road or the detour is not long, I would suggest you include it in your tour just out of curiosity.

The Parco del Valentino is the best known park in Turin. 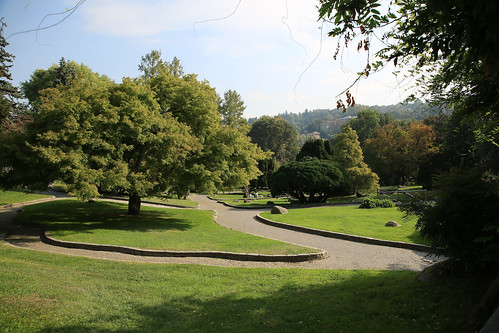 It seems that its origin dates back to Roman times and documents from the 13th century indicate the presence of an ancient chapel dedicated to Saint Valentine (it seems that there were also relics of the saint later moved to the church of San Vito). One of the park’s first points of interest is the Valentino Castle, built in the park between 1630 and 1660 and once the Savoy’s summer residence. Since 1997 it has been included in the list of World Heritage as part of the UNESCO Residenze Sabaude serial site. In the 19th century, modifications were made to the park, according to a project by the French landscape architect Barrillet-Dechamps. For the Italian general exhibition of 1884, however, the medieval village was built. In the park there is also the Fountain of the Twelve Months (or of the Ceppi) is formed by a large tub in rococo surrounded by twelve statues representing the twelve months of the year: it was built by Carlo Ceppi in 1898 for the relative fiftieth anniversary of the Statute Albertino.

The medieval village is a museum dedicated to medieval architecture. 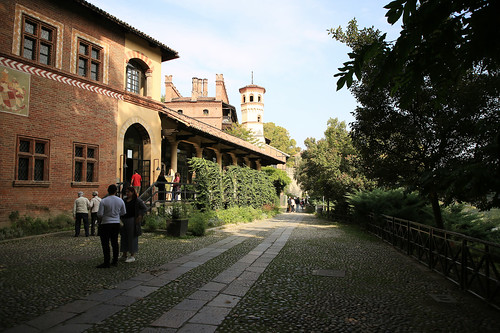 Project by Alfredo d’Andrade (passionate about medieval architecture), the village was to re-propose the architectural styles inspired by the Piedmontese and Aosta Valley castles of the Middle Ages, with a lot of visitable fortress.
The buildings, built as a pavilion for the Italian General Exhibition which took place in Turin from April to November 1884, mainly refer to buildings from the 15th century. Intended for demolition at the end of the Italian General Exhibition, it became a civic museum in 1942. In fact it is a (fairly) faithful reproduction of a late medieval village where there are houses, churches, squares, fountains and decorations surrounded by palisades and fortifications. Everything is “obviously” dominated by the fortress (copy of some Piedmontese and Valle d’Aosta castles).

Unfortunately, I ran a lot on Sunday morning: between the city marathon that diverted many buses (which was not problematic if it weren’t for the fact that the races were missing) and the train just after lunch I managed to take just a short walk. I admit that I would have liked to find out better, but this only means that I have one more reason to return in Turin.