We started our visit to Fabriano in the late afternoon after we had left our suitcases at the hotel and also rested a little. We parked downtown, in a small square with paid parking (blue stripes): you pay 1 euro 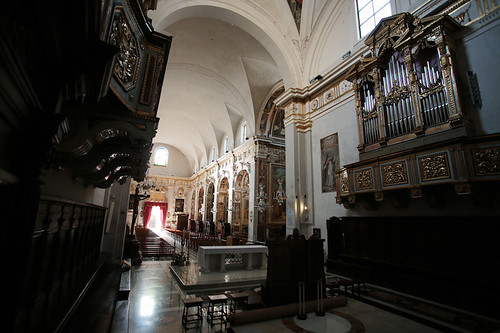 per hour until 19:00. After a few photos of the square on which it overlooks, we went to visit the San Venanzio’s Cathedral. We visited it without losing a corner because there are many small details that affect its visitors. Inside you can admire paintings by several very important artists, in particular, the stories of the Passion and the Crucifixion, made on canvas around 1620 by Orazio Gentileschi. 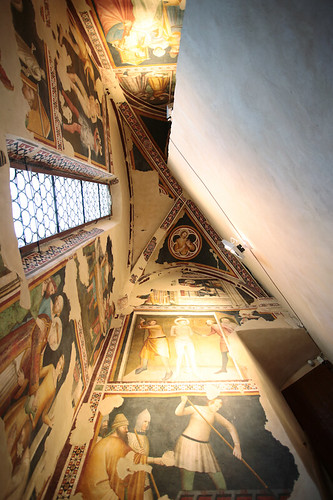 As we walked around the cathedral, Giorgio approached us, offering to guide us through the cathedral and other places in the city that otherwise we would not be able to visit. We decided to seize his proposal and start with two tiny chapels on either side of the altar. The first one was the San Lorenzo chapel, on the right side of the altar: inside it there are some frescoes made by Allegretto Nuzi perfectly maintained (this perfect maintenance is due to the fact that, due to a plague epidemic, the tiny chapel was closed with lime). We move to the Chapel of the Holy Cross, which is probably even smaller than the previous one: the frescoes, always very beautiful, are always by Allegretto Nuzi. One of the last things Giorgio told us (in fact, one of the few things that I remember), is that on the ceiling of the cathedral, once, there was a map. Giorgio gives us one of the books – guide of the cathedral and then after he has closed all the doors of the temple, we head all three to the next stop of our tour in town.
We then went to visit the church of San Benedetto. Small but not too much, the interiors are spectacular and full of details (like the drapes over the arches of the chapels) that make it even more vibrant. I suggest you look at the ceiling and its details carefully for a long time: the splendour is unique. On the floor there is a crow carrying a piece of bread in its beak: it seems to be the image of a raven taking away a part of bread infected during a plague epidemic that hit the city (in 1383 – 1384). Behind the altar, there are some frescoes that would need restoration because the passage of time damaged them, but unfortunately, 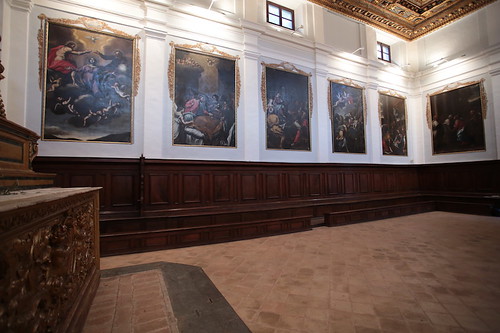 they are not rearranged due to lack of funds. Continuing the tour of the city, the next stop we made it to the tiny Oratorio del Gonfalone: the gem of the oratory is undoubtedly its golden wooden ceiling finished in 1643 by Monsignor Leonard. I advise you to dedicate right to the roof a few seconds more of your attention because it is the detail that immediately jumps to the eye. The Annunciation you can see on the altar is a work by Viviani Urbinate commissioned by Francesco Stelluti, a scientist and poet from Fabriano (I found these names on the historical website about Fabriano). 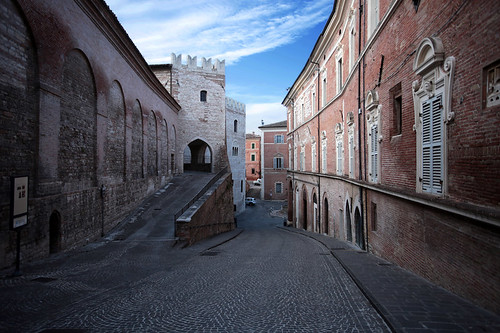 At this point, we greeted our guide, and we take another walk to the centre of Fabriano to take a few more photos of the city before dinner. Already during my brief visit, I realised that it was (only) thanks to our guide if we were able to discover the real city soul, even being able to access these places that, as I said, otherwise would be inaccessible to the public. The great passion that Giorgio puts his work (as a volunteer) has shown us a different city, a city full of history to tell those who visit, a town that also makes me want to come back even just for a short and quick walk. If by chance you met Giorgio during a visit to the cathedral and he would offer to guide you for a short tour I suggest you accept his kind offer because he will repay the time you dedicate to him (I do not know, I have to say, if he speaks English or not). If you have ever visited Fabriano let me know what you think, I liked it so much! 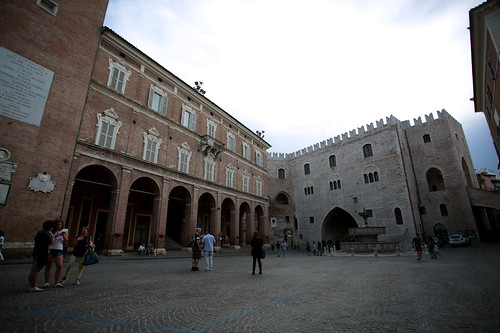