Trogir was an unexpected trip on my trip to Dalmatia. Choosing a boat trip to be done starting from Omiš, instead of the one on the island of Hvar, this one that included two hours in Trogir and two other hours for a swim in the blue lagoon was merely timing perfect (the penultimate day of vacation before returning to Italy). 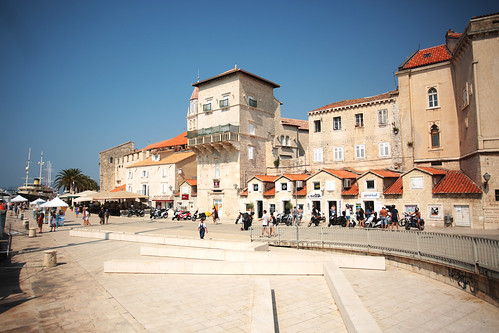 Before talking about what to do and see in the city, I leave you some information about the boat trip that took me to discover this small town:
Boat: it is called Kairos and is family run.
Cost of the tour: 200 kunas per person (with an advance of 50 kunas per person)
Duration of the trip: one day. The ship left at 8 am (precise at the second), and we returned in the evening at 19:30.
What it includes: two and a half hours in Trogir, an abundant lunch (of meat or fish), two hours to the blue lagoon and, of course, the time to get to the two places. For lunch, you will be asked for your preference when booking. During the boat ride, you will also be offered a welcome drink (a glass of grappa), various juices and biscuits at about mid-afternoon.
Starting point: from an untitled road that runs along the river Cetina on the other side of Omiš centre. 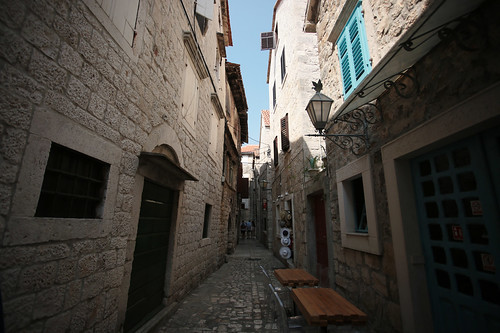 But back to talk about Trogir, another UNESCO heritage of Croatia and the historic city centre is concentrated on a small island connected to the mainland by two bridges. The name of the city changes according to the language used: the name “original” is Trogù, in Croatian, it becomes Trogir, Trau in German, and Tragur in dalmatic. 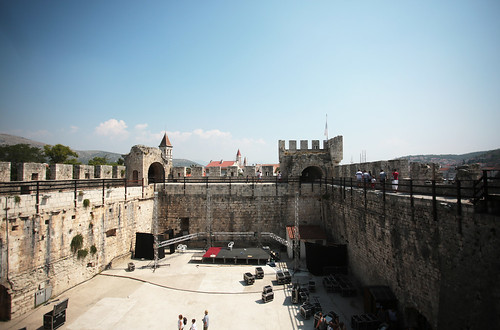 Once I arrived in the city, I started from the Kamerlengo Castle: it is a defensive tower, built in the fifteenth century by the Venetians, so inside you will not find rooms and rooms to visit. However, getting on the walkway offers a 360-degree view of the city. Admission costs 20 kunas per person, and the ticket office is located just after the front door. It can be easily reached by walking along the promenade, going to the tip of the historic centre island (going towards the sea). You go up and down stairs not very big and very crowded, despite the heat and the summer sun: you will find a crowded walkway and cross many people, trying to 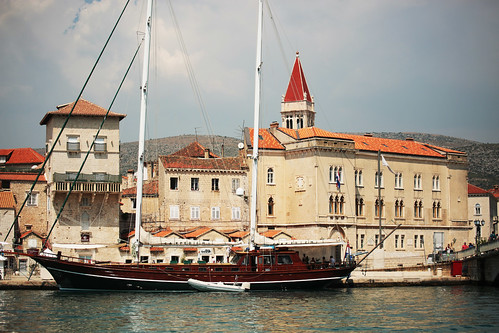 figure out who has to give way to whom. In addition to that, to climb the highest tower you will undoubtedly find a row to the staircase, unique for both climbing and descending. It is not the only fortress/tower of Trogir, not far from the fortress of San Marco (the Venetian influence comes back).
Interesting is the Church of San Sebastiano, built in 1476 and made particular by a blue clock. Today it is no longer used for liturgical celebrations, and inside there are photos of the war in Croatia in the Nineties. The narrow streets of the centre are very reminiscent of Venice, both for the style of the buildings and for the “grandeur” of the roads. 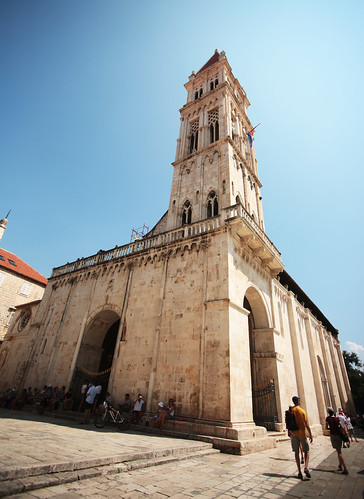 The Venetian style is, however, a characteristic of the entire historic city centre. On the main square overlook several buildings, starting from the Cathedral of San Lorenzo (called San Giovanni by the inhabitants of Trogir). Romanesque-Gothic basilica with three naves seems to have been built on the foundations of an ancient basilica destroyed in the 1123 Saracen raid. It is thought that the works started in 1213. In the XV century, an atrium was added and dated back to the same also the Gothic rose window on the western façade. The ancient palace of justice of the city is the loggia, located in front of the cathedral. Mentioned perhaps for the first time in the fourteenth century and dominated by the symptomatic relief of Nicola Fiorentino representing Justice and Saints. Lorenzo and Giovanni Orsini. Always on the main square of the city, full of tables of bars and restaurants, also overlook the Palazzo Cipiko (built in the ‘400 and today the Town Hall) and the Palazzo Lucic, which strikes for its courtyard and portal both from the Renaissance period. 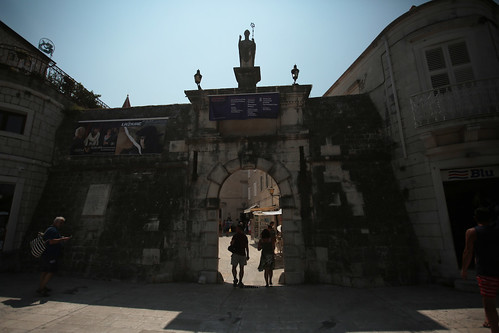 Trogir also has its own small “museum of the city“. It is not very big, it is located in the Garagnin-Fanfogna palace in Romanesque and Baroque style (framed by the narrow alleys of the historic city centre). It tells about the development of the city up to the present day. I ended my trip around the town to the north gate, a monumental gate on the other side of the city’s waterfront port. Not far away are the gardens, where you can shelter from the heat and the heat of the sun (in summer it is felt and even a lot). If you are not planning boat trips that include a stop in Trogir, you can quickly get there by land, thanks to the highway that connects it to Split and Sibenik.